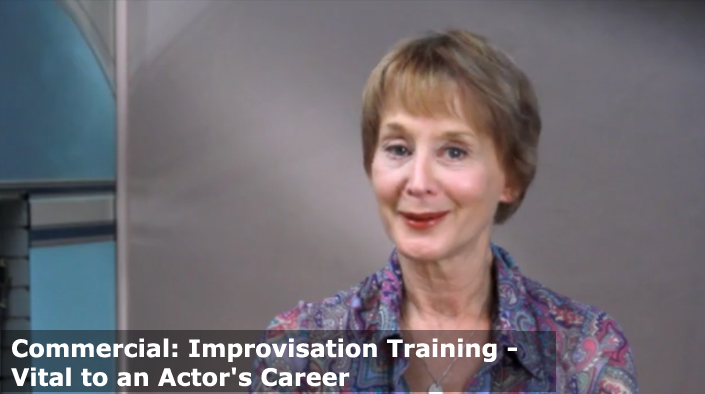 As a commercial actress, I have booked over 400 national commercials and I truly believe that I got many of those jobs because of my Improvisation training. When I first started doing commercials there were no actual commercial audition training workshops so I studied acting and then started doing Improvisation classes – which I loved. I quickly saw that the freedom and confidence I was getting from the Improv work was helping me do better at my auditions and thus I started booking even more jobs.

Granted that era was not anywhere as competitive as it is now but I do know that Improvisation training is even more beneficial and vital today then it ever was then for several reasons:

First of all, so many auditions today do not have dialogue and require Improv skills therefore commercial agents are more interested in actors (especially new actors) who have professionally studied improvisation because agents know that it will be easier to them auditions.

There are more non-scripted commercials being cast then ever before so casting directors usually want actors who are good with improv. Legally SAG/AFTRA does not allow actors to Improvise dialogue at their auditions so actors will probably never be technically asked to “improvise” but in actuality that is what they will be doing – verbally creating their own dialogue and/or scenarios. AND those who study Improv usually do so much better at those auditions.

There are more non-scripted commercials being cast then ever before so casting directors usually want actors who are good with improv. Legally SAG/AFTRA does not allow actors to Improvise dialogue at their auditions so actors will probably never be technically asked to “improvise” but in actuality that is what they will be doing – verbally creating their own dialogue and/or scenarios. AND those who study Improv usually do so much better at those auditions.

Find a teacher or institution that specializes in Improvisation. A lot of studios mix in the Improv training with acting, commercial and cold reading. This is not really offering the maximum value of studying Improvisation. Then, some teachers offer it as an on-going class. There are several problems with this format.

I strongly believe that Improvisation should be a second training workshop along with your acting class. Your acting training is focused on the techniques specific to whatever discipline of training you choose – motivation, emotional connection, subtext, character life, pre-life and after-life, etc. Whereas good improvisation training focuses on creativity, commitment, listening, trusting instincts, supporting the other actor and building confidence. When both acting and Improv are studied at the same time, you will get more out of your acting class and you will be ready to start auditioning sooner.

At the start of the Improv classes that I offer in my program, actors talk about how nervous they are about taking an Improv class. Most are concerned that they are not funny, or creative or instinctive. A good improv class does not push you to be funny and when you are “in the moment”, not thinking or planning and being instinctive , most actors find that they are creative and often funny. Improv is about freedom and it is a process that is achieved in a safe space with a really good teacher who creates a supportive NOT a competitive environment. Don’t we all want that feeling of freedom in our acting as well as our life.

Ever wonder how they choose the actors they book on television commercials? Is there some secret determining factors that influence the casting decisions? There is -and I think it is important to for you to know what it is. From years of being a working commercial actress and booking over 400 commercials, having done the casting for over a thousand TV commercials and being a commercial audition teacher since 1983, I strongly believe that there is a formula for why actors get commercial callbacks and bookings. I know it isn’t carved in stone or even the exact way the director, ad execs and clients would verbalize but I REALLY believe that this is basically the formula.

60 percent of why actors get callbacks is their physicality – what they look like. Since those chosen must represent the client’s target market and must be a strong physical representation of the character they are portraying.

20 percent of why actors get callbacks is their talent and creativity – what they actually do on the audition whether it is an improvisation or a scripted monologue or a scene. The decision-makers look for actors who are believable, unique and/or their work

The remaining 20% factor, is the actor’s confidence, personality and essence which usually needs to match up to the actor’s look. This is the factor that most actors don’t consider and often don’t understand.

Now, let’s say the actor is a great physical type for a particular commercial and does a great audition but he/she comes off arrogant or too silly then he/she will probably not get a callback.

Or if he/she is really approachable and likeable (which is important for most commercials) and is the perfect type but overacts on their auditions (which happens way too often) then again, he/she will not get a callback.

Now when it comes to getting the booking, the numbers change a little, since there is some agreement between the ad execs and the director on the looks of those being called back, the importance of the actor’s physicality is still important but now since it is still subjective, it is about 30%.

What also is relevant in the “looks” area is when it is necessary to match actors with spouses, friends, workers or family.- the consideration becomes, Do they look like they belong together. What the actor does in their audition, how they take direction, their creativity and talent now becomes the prominent factor at 40%..

The actor’s attitude, personality and essence factors comes in at 20%..

And finishing up the BOOKING equation are wildcard factors: it could be anything from the actor’s wardrobe (which one of the decision-makers really likes for the spot) to any of the execs or director having subjective preferences or dislikes. There are too many subjective wild card factors to cover here but I am sure you can imagine some.

This information should help you to not take it personal or think you did a bad job when you don’t get a callback or booking. And it should help you have the insights you need to put the odds in your favor for booking commercials. And by the way a lot of this is also applicable for booking smaller roles in film and TV.

Audition Tips for TV Commercials – Solo Dialogue to the Camera

Actors – Moving Past Challenges to Success
Scroll to top