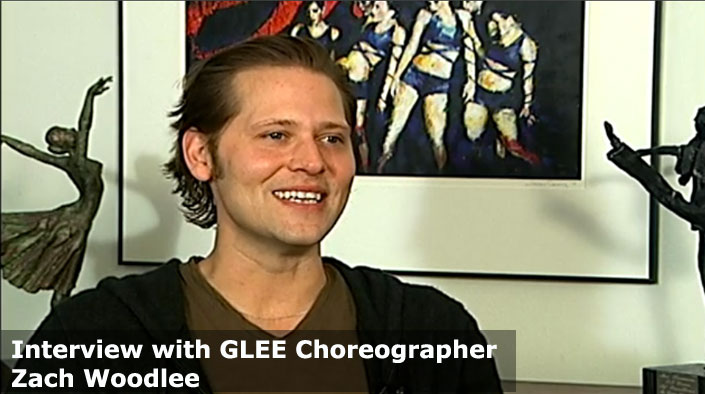 The choreographer of the FOX hit series Glee, Zach Woodlee, sat down with Master Talent Teacher Joe Tremaine to discuss how his path led him from Texas to Los Angeles and on to become the choreographer of the insanely popular television series. Zach talks about what he looks for and expects from dancers when auditioning and hiring for Glee, and offers his advice to dancers in the entertainment industry.

Growing up with a mother who owned a dance studio, Zach’s childhood was immersed in dance. Later, after studying geriatrics in college, he worked with many area nursing homes to keep movement as the main focus of their recreational programs. However, fate would soon move him to Los Angeles in the pursuit of a dance career. Zach’s mornings began at 4:15 a.m., when he got up, put on all of his ballet gear and topped that with his barista uniform. His shift at Starbucks stretched from 5:15 a.m. until 10:15 a.m., which gave him just enough time to make it to his 10:30 ballet class, tearing off his apron and barista gear as he entered.

Zach got his first break dancing for LeAnn Rimes, then on to movies, joined SAG and began working union jobs. While dancing on tour with Madonna, the realization that an ongoing back condition would prevent him from dancing for much longer. He later made the transition into choreography. Zack=s Glee experience began with meeting show creator Ryan Murphy and realizing he had an innate understanding of the script. The pilot became a passion project for all those involved. Once they were satisfied it was packaged perfectly, they gave it to the world and the rest is history.

Regarding the dance industry, Zach reveals what he looks for and relies upon when casting dancers for Glee. Discussing the importance of keeping your photos and resumes updated, he emphasizes how your work ethic will inevitably make or break you. He also feels that younger dancers need to understand the importance of performing in a group, instead of just as a soloist with specialty tricks. Proper training and a technical background play an important role for him as a choreographer in creating the proper lines. He closes by saying that there is no reason to ever stop training or supporting your dance community. In his words,” If you don’t keep pushing yourself, you will become stale, and you will lose a little bit of your luster”.

Advice and Tips from Professionals for a Dance Career – Part 1

A rare interview with Award-Winning Director/Teacher Kimberly Jentzen by Emmy...

Microphone Technique for Speakers, Performers and Entertainers
Scroll to top