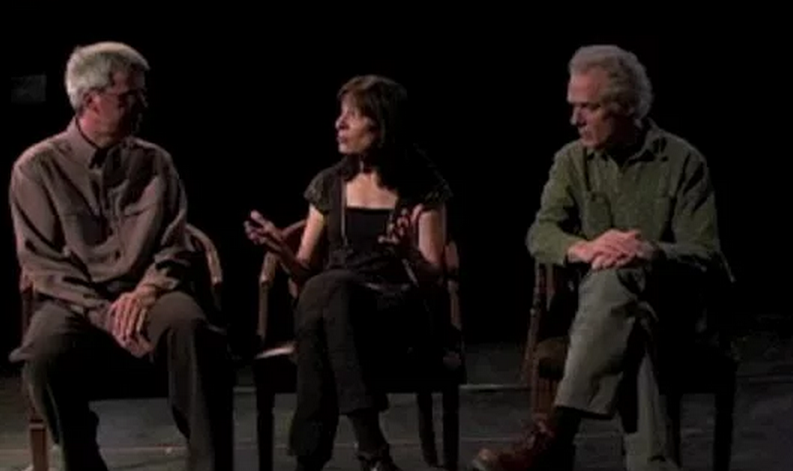 “It takes two to speak the truth: one to speak, and another to hear.” – Henry David Thoreau

Pam Berlin and Billy Carden work with and direct some of the greatest theatre actors of our generation. They share many insightful observations about the theatre auditions and the rehearsal process in the accompanying video to this text. In Part 2, several compelling ideas were discussed.

Doing/Being
As a theatre director, I find it necessary to be obsessed with a character’s intention during the rehearsal process. “I want” is the fundamental building block of story. It creates conflict and dramatic interest. When actors are not specific about what they want, when they don’t play ‘I want’ with urgency and high stakes, the work is dull and vague.

However, intention isn’t played in a vacuum. Actors that play tactics to get what they want, but are oblivious to how the effectiveness or ineffectiveness of their tactics are received are missing the vital connecting point that allows live theatre to be a powerfully transformative art form. It is in the exchange between actors – acting and reacting, speaking and listening, that the living connection to the present is forged. Uta Hagen said, “the work you do is directly proportional to the quality of your listening.”

The wonderful meditation, mystery, conundrum, and perhaps rarely achievable goal of the actor is to fully occupy both doing and being; acting and listening. Having the discipline to return to the touchstone of given circumstances and being very specific about place can create a grounding in action that makes the “I want” inevitable. This attentiveness to given circumstances and place can create a fertile place for the dance between doing and being to flourish. It is the hallmark of great acting and truly live theatre.

How One Step Can Change Everything

Chatting With The Casting Director…Do You Have Any Questions?

In The Moment with Joey Luthman