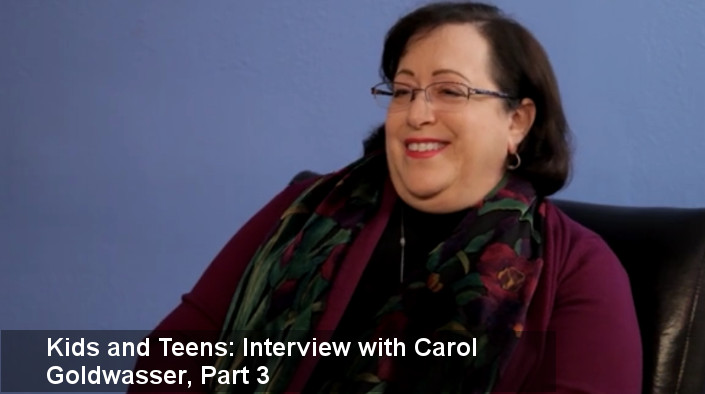 This is the final installment of my 3 part “In the Moment” interview with Award Winning Disney casting Director, Miss Carol Goldwasser. The wonderful thing about Carol’s insights in this interview that separate her from others, is her realistic approach to working with and getting the most from child actors. Not that her comments aren’t relevant to actors of all ages. It’s nice to know that she sees the extra special care needed when drawing out the best performances from kids and teens. Especially when the child actors and teen actors are often the most free. Enjoy the interview. I know I did.

Diane: How is casting Kids and Teens different from casting adults?

Carol: You really have to give them more leeway and more coaching. A question that I get asked a lot when I teach is “would you give that same redirection in an audition room?” And my answer is usually, “it depends on how many people I have in the waiting room and how interested I am.” You really have to give kids the benefit of the doubt. You have to guide them along. Adults, hopefully, have come through a conservatory program or an acting program and will come in having made certain choices; you’re physically right or wrong, or you’re funny, or not the right quality or you are the right quality. I have to be more flexible with kids and lead them by the nose. When you direct them they will understand and take your direction but they don’t necessarily come in with the choices so I have to give them a lot more room to find it. Casting is a compromise as is, it’s not going to be exactly what the producers and writers envision. As a casting director you have to let them know that. Maybe an actor doesn’t have all of the elements of what you envisioned the character to have, but he’s 14! Can we make some adjustments to what he brings in the room? Can we put him with a coach and coach him through the testing process? On one of my pilots we had to do just that. There was an actor that we felt had 80% of the qualities for the role but he definitely needed work on his acting skills because it was a role that required not only acting skills, but singing skills and dancing skills and instrumental skills. We had him work with a coach through the audition process. We really had to take it home. This has happened on more than one project. You really have to work with them to get them there, especially for a series where you are banking on this person’s ability to perform and have the appeal to get the audience. It’s not just one episode. You are trying to build the skill or get them to a place where you see that this is someone who is going to bring viewers in for 3 seasons. It sounds like a very daunting process but it is actually fun! The whole process of playing comedy and learning comedy is a lot of fun. If it’s something that you’re interested in you should take advantage of all the training that’s out there, both online and in person. And you know, jump in and see what you can get from it!

C: Yes! Training is so important. Auditions are pressurized situations and if you are in your class on a weekly basis, when you go in for an audition you think “this is what I do. I say words. I enact a character.” It doesn’t feel as if you’re so invested or freaked out in that one situation because this is what you do on a weekly basis. You’re open to taking direction because it’s what you do in your classes every week.

D: And collaborating and making choices and all of the things that Actors of all ages need to do.

D: I want to thank Carol Goldwasser on behalf of all of us because I’m sure that there’s so much that we’ve all learned here today. She’s a wonderful resource for really knowing how to audition for Children’s television. So tune in next time and thank you so much for joining us! We’ll see you at Diane Christiansen Coaching. Give us a call! www.DianeChristiansen.com

Stunt work is acting too!